Bullying: The abuse of a power differential 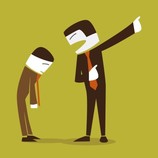 Fortunately, bullying is beginning to get the attention it deserves as a mental health, relationship and social problem. One reason bullying hasn’t made its full impact on the radar screen sooner is that it tends to be mistakenly seen as only a problem for children in the school yard. Bullying is indeed a serious problem for children at school. But bullying also occurs at home, on the highway, at the workplace, in politics and even between nations.

Bullying can occur whenever there is a relationship between two people or groups of people and one party is more powerful, in some way, than the other. When the more powerful party chooses to take advantage of the other in order to dominate, control, injure or use for its own pleasure, it is bullying. Bullying is the exploitation of a difference in power in a relationship.

The many faces of bullying

The husband who makes more money than his wife is bullying when he treats her disrespectfully and points out that she couldn’t survive without him. A parent is bullying when he or she screams in the face of a child and intimidates the child into submission.

An out of control adolescent might turn the tables and bully an insecure parent using violent outbursts and dangerous threats. The manager who has the power to hire or fire is bullying when he or she talks down to employees. And yes, the popular girls and the tough guys are bullying when they humiliate and push their less fortunate peers around in the cafeteria or on Facebook. In all cases one party is taking advantage of a relative weakness in the other.

What do we do?

Let’s start by not thinking of it as if there are two kinds of people in the world, the bullies and the bullied. Let’s talk about the verb “bullying” and not the noun “bully.” Let’s recognize that, since we all have some power over someone, we all need to learn the skills and discipline to resist the temptation to bully. First, we need to recognize when the power differential is in our favor. We need some sense of right and wrong to tell us not to abuse that power. We need the impulse control to stop the urge. We need to learn what it means to empathize with the less fortunate. We need to develop character. We need to learn the social, communication, negotiation and management skills in order to pursue our goals with integrity and without abusing differences in power.